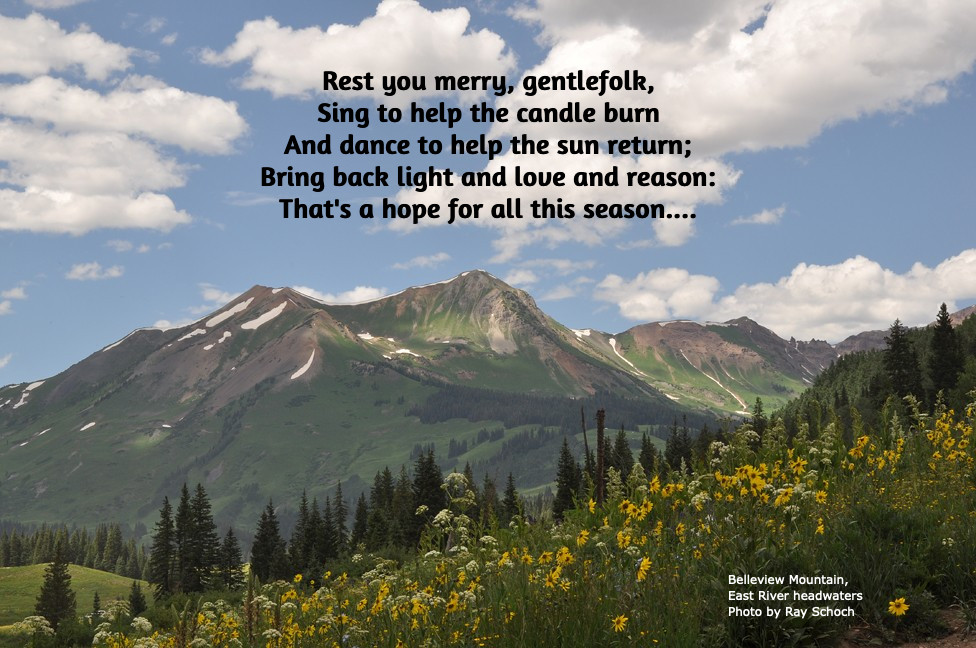 Enough gallivanting around the Mississippi Basin and its rivers; back to the troubled and troublesome Colorado River, currently experiencing its worst dry spell since around 800 CE. The Colorado Rivers, I should maybe say, since for all practical (human) purposes the river is now managed in a quasi-de jure way as two river basins under the Colorado River Compact and subsequent ‘Law of the River’ actions: an Upper Colorado River and a Lower Colorado River.

Previously here, I’ve been exploring the Colorado River Compact at its centennial, in what is certainly the worst year in its century. Here are some things I came up with in that exploration, that I don’t think are getting enough attention in our efforts to search our own souls and the soul of the river in the desert as we try to figure out where we are going from here:

The Colorado River Compact, and all the subsequent laws, treaties, acts of Congress, and other consensual agreements involving the river thus become efforts to deal with the consequences of applying a powerful growth engine to an erratic and relatively modest river  – and they fall short to the extent that they too cautiously circle around (or just ignore) the problem of a body of law encouraging unlimited demand on a limited resource.

2. The Compact could not do what its creators set out to do, so they settled for an expedient resolution to facilitate development of the River.  The Compact was created because Euro-Americans wanted to control a rambunctious river whose erratic flows made it hard to use for civilized pursuits. But the growth logic of the foundational Law of the River (the appropriation doctrine) made six of the seven Colorado River states fear the pace of development of the seventh state, California, if the river were controlled; California could conceivably lay claim to most of the river’s water before the other states really got settled.

The six states thus wanted an ‘overlay’ to the unconstrained law of appropriation that would assure each state of enough water to meet their own future needs at their own pace. Unfortunately, they did not have – could not have had in the 1920s – enough solid information of what their reasonable future needs were. So they settled for an expedient resolution; they divided the river into two basins, above and below the uninhabited canyon region; each basin was given a little less than half the estimated flow of the river to develop, with the upper river basin committed to deliver a fixed amount of water to the lower river basin (75 million acre-feet over any ten-year period).

3. Mistakes were made. Much has been made of the fact that the Compact commissioners selected an estimated flow of 15 million acre-feet of water to divide between the two basins, well above what has been proven to be a more realistic estimate of an average annual river flow of 13 million acre-feet by E.C. LaRue and some other Geological Survey scientists. It was, however, well below the optimistic 16.8 million acre-feet estimate by the Bureau of Reclamation.

It was also an ebulliently optimistic time in America – the advent of the Anthropocene, when we thought we were on the verge of freedom from the stodgy limitations of nature. The commissioners acknowledged that they did not have enough information to accurately divide the waters of the river seven ways, and were content to leave that task ‘to the hands of those men who may come after us, possessed of a far greater fund of information.’ We now know that they should have listened to the USGS scientists, but it is easier and kind of superior to tsk-tsk as ex post facto Monday morning quarterbacks, than it is to acknowledge and understand – maybe even regret the loss of – the spirit of the times when the mistake was made.

But on the other hand, when the Compact was created in the early 1920s, the federal government was aggressively pursuing the ‘soft genocide’ of forced assimilation. Between 1900 and 1925, the number of Indian youth essentially kidnapped into ‘Indian Boarding Schools’ swelled from around 20,000 to more than 65,000. The official policy was ‘kill the Indian to save the man.’ The Compact commissioners were all white professionals receiving mixed messages from the government, and might be expected to think, even hope (river gods forgive them), that any Indian water claims might fade away if government policy succeeded – which it didn’t, no thanks to federal Indian policies before or since. And a reserved water obligation for the reservations remains an untransacted and pending commitment.

So yes, the Compact kicked some cans down the road, that it’s now time to pick up and deal with. But no one seems to be saying anything about a much larger and more consequential Compact mistake….

4. Dividing a desert river basin into two river basins is not a good idea. It worked – sort of (Arizona didn’t accept it) – as a temporary fix to break the logjam of not knowing enough to make an equitable seven-way division of the waters. What made the two-basin Compact work at all, sort of, was the fact that, until the construction of Glen Canyon Dam, the river itself, flowing unconstrained past Lees Ferry, kept the water supply (nearly all from the Upper River Basin) united with the growing water demand (mostly in the Lower River Basin).

But once the big dam near Lees Ferry was in place, the supply-demand distribution became a management problem that gradually succumbed to bad power politics. The Bueau gave the Lower River Basin its Compact allocation and more, regardless of growing water supply problems upriver, and the Upper River Basin developed a large supply of justifiable but unproductive resentment. The Compact, which confused ‘equitable’ with ‘equal’ in its division between two basins, is broken by the dam that turns it into two rivers, one supplying the other in ways both unequal and inequitable. It’s not the ‘structural deficit’ per se, but the refusal to address it, that breaks the Compact.

So – what can we do? How do we muddle forward from where we are now? No one is asking me, but of course I have some thoughts….

This reunion would have to start with a consensual seven-state agreement – a new compact, if you will, to execute the task deemed impossible in 1922: a seven-state division of the river’s use. After a century of development, this has been achieved, de facto, and equitably enough. The lower river basin states get the consumptive use of almost twice as much water as the upper river basin, but they spread it over far more people and quite a bit more (and more productive) ag land.

This will not be easy, of course – but nothing ever is in the Colorado River region. California and Arizona have gotten so used to using ‘undeveloped upper river basin water’ that they’ve forgotten that that ‘surplus’ hasn’t existed for decades. They think the ‘structural deficit’ is an act of God about which nothing can be done, rather than just the consequence of their growing on borrowed water, a loan now being called in. But the hardest part for the lower river basin will come when the firm numbers for present use apportionments by state all have to be converted into percentages of the diminishing whole river – which the upper river basin states have already been doing, living closer to the vagaries of a desert river. The upper river states will no longer have to fear a call from the lower basin states, so long as they stay within their apportioned percentage of what’s there.

The real reunion of the basins into one river might begin when those in the lower river basin acknowledge that the water supply for the river’s desert lands comes mostly from snowfall in mountains in the river’s headwaters. This suggests that the downriver users of a desert river should accept some responsibility for the maintenance and improvement of the river’s mountain headwaters, their water supply. And those in the upper river basin would need to acknowledge the need for that help, especially if it is financial.

‘Maintenance and improvement’ of the water supply? Can we ‘improve’ the water yield from a river’s headwaters? An undigested fact about the mountain headwaters of the Colorado River Basin is the scientists’ consensual estimate that somewhere around 90 percent of the precipitation that falls over the river basin does not make it into the river. It either returns fairly quickly to the heavens as water vapor, or soaks into the ground to be transpired by trees, grasses and other plants back into the atmosphere. Scientists estimate that as much as a third of the precipitation that falls is lost through sublimation in the high headwaters: snow and ice being vaporized by sun and wind without even turning into water first.

Some quantity close to another third of the precipitation is transpired through the forests that form a broad band around the headwaters reaches of the river. Contrary to Forest Service founder Gifford Pinchot, the forests are not ‘father’ to the rivers that work their way through the forests; the forests are just some of the first major ecosystems that depend on the river’s water for their life. We love and need the forests, and they do provide shade and shelter for the snow that makes it through the trees to the ground – but they also drink a lot of water (more as the ambient temperatures increase), and not always for their own betterment; the density and age of forests we have protected from cleansing fires result in the consumption of a lot of water by big old forest trees not really getting enough to be healthy.

Those forests are almost entirely managed by the U. S. Forest Service, management that must include the long-term health and well-being of the forest itself rather than just short-term commodity production. But are there ways to manage a healthy forest that maximizes the Forest Service’s 1897 organic act charge ‘to secure favorable conditions of water flows,’ as well as (or instead of) the charge ‘to furnish a continuous supply of timber’? We don’t really know, because the Forest Service has not paid as much attention to optimal water management as it has to optimal timber management. We do know, however – for one example – that timber managers favor denser stands to produce tall trees with less branchiness, but that density increases the amount of snow intercepted by trees, which increases snow loss through sublimation.

To even learn how to maximize water yield from the headwaters’ rocks, ice and forests will require experimentation, trying things out, and it will require creative scientists and lots of boots on the ground that the perpetually under-funded Forest Service cannot afford. If, however, all forty million users of the Colorado River’s water thought of themselves as part of the whole river’s watershed, top to bottom, they might be willing to pony up a pittance for the health and vitality of the headwaters that produces their water. This is already happening to a modest extent; some of the big dogs in the Lower River Basin – the Metropolitan Water District, the Southern Nevada Water Authority, the Central Arizona Project – are contributing funding to a cloud-seeding project in the river’s headwaters, to increase snowfall from selected storms. That is a beginning.

And the next steps? Well, at some point, we have to descend into the cellar foundation of the Law of the River, and figure out how to adapt the frontier instincts of the appropriations doctrine to a civilization of 40 million. As Tom Buschatzke, Arizona’s Director of Water Resources said, just last week at the meeting of the Colorado River Water Users convention: ‘The single biggest roadblock to solving the problem of stabilizing the river is the priority system.’

There will be more on this imagined reuniting of the two rivers and their basins. Stay tuned.