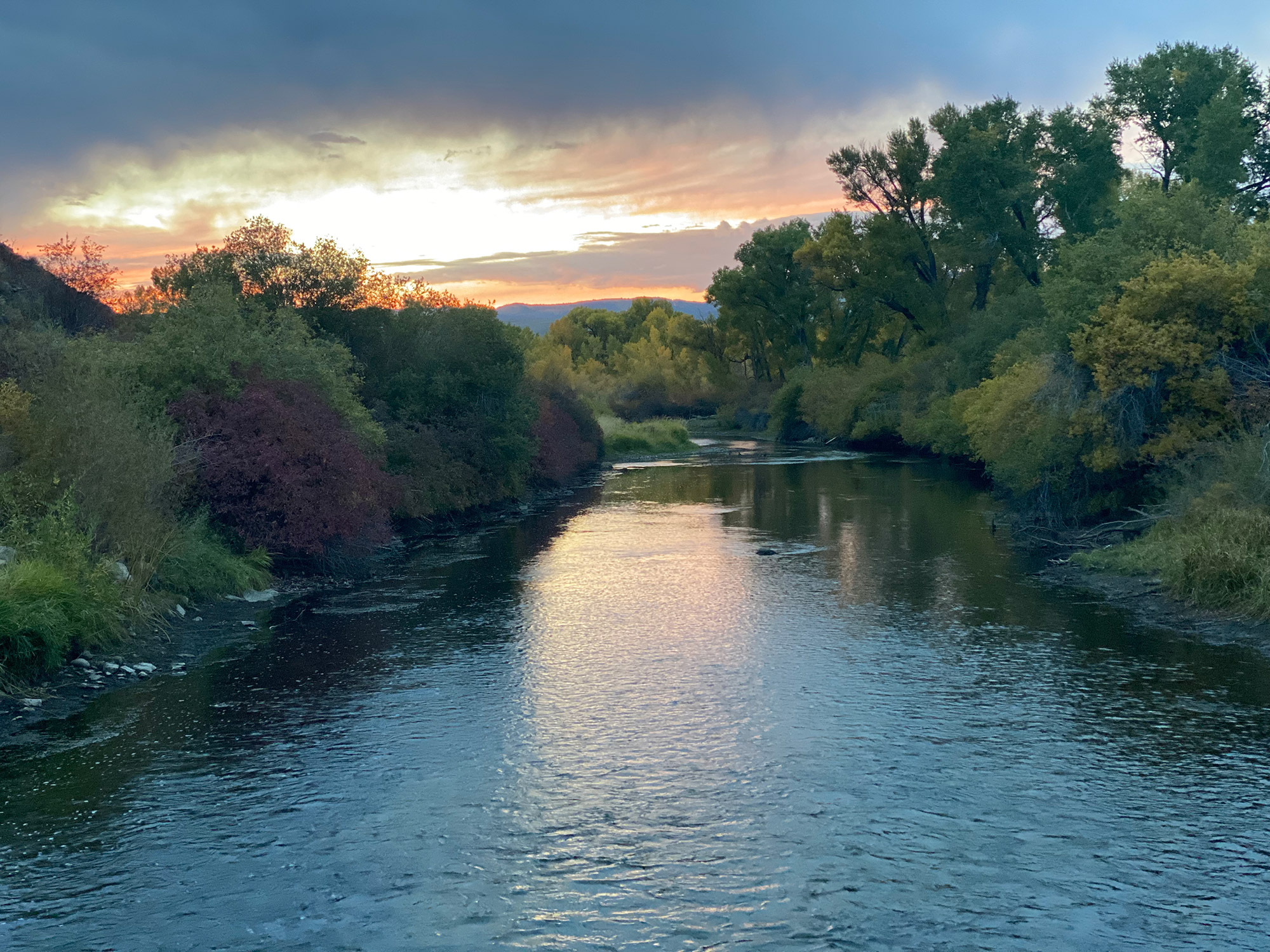 Sibley’s Rivers? What, Why and – Why Not?

The first thing I want to say about ‘Sibley’s Rivers’ is to not be misled by the name; it’s not going to be all about rivers – although because the West will be the locus of focus, the rivers that run through it (or don’t) will be frequent topics.  Especially the Colorado River, which is so ominously interesting these days.

What you’ll find, should you decide to visit ‘Sibley’s Rivers’ from time to time, is mostly going to be ‘rivers of words’ about learning to live in the Anthropocene. The Anthropocene: this new epoch in the eternal evolution of the planet, precipitated by changes that we humans, purposefully or inadvertently, have imposed on the planet’s basic systems, changes which are now altering the conditions of existence for all life on the planet.

Most of the scientific community accepts this as a fact of life we now have to learn to live with, and measure up to. We – all of us, just in the way we daily live – are a major change agent acting on the planet, on a global scale, which means that what we do now, or stop doing, carries a major responsibility for the continuity of much of the life on earth – certainly for the continuity of our own species. This is what the president means when he calls it an ‘existential challenge’: our very existence is at stake.

Are we up for this? As the rational, problem-solving species we tell ourselves we are? We humans tell each other stories, mythologies, about ourselves and the world we live in – our origins, our development, our relationship with other living things and with the planet itself – and we want our stories to show us as a positive force in the world, in the systems we impose on the nature of things around us. These stories are part of who we are.

Most of us probably grew up, as I did, on the ‘Ascent of Humankind’ story: We humans emerged as a poor little species with little going for us except a big active brain; for hundreds of thousands of years we crept around slipping into niches as foragers and hunters in all kinds of ecosystems, and somehow we managed to survive. Then around 10,000 years ago, we improved our lives with the invention of agriculture, bringing our food sources together under our control; we settled in towns rather than wandering around the landscape following the food. Success in that gradually led us to gather in larger and wealthier cities; we learned to write, developed the sciences and creative arts, created beautiful things and useful things that we traded with each other, and with other advanced city-states; we learned to make good wine and spirits. We became a civilization, the highest ascent of the species; we spread our light through the conquest and enlightenment of less well developed peoples. An originally insignificant little species became the dominant species on the planet. We are not yet perfect in all our systemic efforts to address the challenges to civilization, both internal and external, but we are, always, steadily improving. This is the mythos of Western Civilization, now the global civilization, in the Holocene, this lovely mellow 10 or 20 thousand year epoch that brackets the ‘Ascent’ story.

So what does the dawning of the Anthropocene do to the Holocene’s ‘Ascent’ mythos? If we go by the classical definition of ‘tragedy’ – knowledge gained by the protagonists too late to save them – then our foundational myth turns from a tale of triumph to a tragedy if it were to end now with the end of the Holocene. So of course it can’t end now. But how do we extend, amend or otherwise carry the story forward? Or do we need a new story to tell ourselves about ourselves and our evolving relationship with our planet?

The fact is, we are not yet displaying any real capacity for executing a transition into the responsibilities we’ve imposed on ourselves in creating the Anthropocene. In this nation we have a president who seems to get the urgency of it, but he is stymied in acting by a political cult that promotes nothing positive and seeks only his failure. Even worse, a solid 40 percent of the American electorate is in vigorous denial about the challenge – and many of them are threatening violent armed insurrection if pushed too far on this and other issues. Self-defense, you know.

The nations of the world (most of them) just assembled in Scotland for the United Nations’ ‘COP26’ gathering, which was designed for a rational species confronting a problem to be solved, but everyone went home with no more than vague pledges offered and no specific missions to accomplish by a specific time, in addressing what everyone seemed to agree is a ticking time bomb. The fossil fuel producers had several hundred lobbyists there to make sure that nothing too productive happened on the carbon issue.

I followed COP26 on the internet through the adventures of a young Colorado woman, Sarah Johnson, at the COP26 conference. A freelance water educator from Carbondale, she wangled an ‘observer’ badge to the Glasgow event, and made frequent posts from there, providing a different look at what was going on there than one got from the mainstream media. Based just on her accounts, I would say that one positive thing that might come from COP26 will be a lot of young people from everywhere who now know each other, and know of each other, and are the ones who will not shrink from inheriting the whirlwind the current crop of poohbahs is probably going to leave in their laps after a few more years of harrumphing.  (Sarah’s COP26 postings are at https://www.wildroseeducation.com/uncop.html.)

‘We are desperate for a new story,’ Sarah said in one of her posts, ‘a promising narrative, words of encouragement grounded in our history of tenacity, strength, and determination.’

Trying to find elements of that story for the Anthropocene is as close as I can come to a statement of purpose for this site, and I hope for exchange and input from people like Sarah, and anyone else who has read this far.

My perspective here is what I think of as Medial West: the perspective of one caught between an Old West and a New West, and not really comfortably at home in either. The Old West has been a culture of resource appropriation and development – at its worst, the rip-and-run mining of minerals, timber, grass and water; at its best the evolution of multigenerational ranching and farming communities, in for the long haul. The New West is most visibly a culture of industrial recreation and real estate development dependent on an aesthetically pleasing natural environment.

But the dominant culture of both the Old and New West has been and is the Industrial Revolution – a huge system for employing the population in the myriad acts of converting nature’s resources into goods and services to be bought and sold in as many forms as possible. The basic difference between Old West and New West industries: Old West industries move the products to the people; New West industries move the people to the products. Just in the moving, both contribute significantly to the greenhouse gases challenge that tipped us into the Anthropocene.

I’ve personally been too involved with both the Old and New West to choose either over the other unconditionally. My mother’s grandparents homesteaded a modest farm in the valley of the North Fork of the Gunnison River in the 1880s, driven by dreams that weren’t very industrial at all, but also weren’t very well articulated; I’ve come to know the fourth and fifth generations of farmer-ranchers here in the Upper Gunnison Basin who are a lot like what I know of my great-grandparents, and who seem to see their lives more as a heritage culture than an economic industry – even though they sell their cattle into the global industrial market.

Access to that market is thanks to people like my mother’s father, who was a civil engineer in the Gunnison River Basin making sure the railroad got to every community – the Industrial Revolution’s first efficient vehicle for vacuuming the resources of the West for the nation’s growing industrial cities – including eventually its human resources, its offspring.

I came to the Gunnison River Basin from the urban-industrial mainstream eighty years after my grandparents, thinking I was fleeing it, but instead went right to work in the incipient industries of the New West. When I realized that I was basically making straight in the wilderness the way for the fullblown advent of the remodeled Industrial Revolution, I tried to pull back, but still had to make enough of a living to keep the family functional, and what else was there?

Nevertheless, I did manage to work my way into two ‘counterrevolutionary’ situations. One was running a small sawmill on the edge of civilization, producing rough-sawn lumber entirely for a local market. The other was two decades of slightly subversive work for a regional college here, trying to develop niche programs to wake the children of the Industrial Revolution up the possibility that life could and should be more than an economy in which we must labor all our lives. My success was about par for the two and a half centuries of that counterrevolution’s steady retreat before the industrial revolutionaries – not much, but hope abides. More about that in future posts – rethinking our conventional sense of our history may help us succeed in the Anthropocene.

My ‘Medial West’ perspective values the work ethic and attachment to place of the Old West people who have stayed long enough to have a story of their own here, but also values – and shares – the aesthetic appreciations of the New West people and the growing effort to find re-creation beyond recreation – probably an essential transition in learning to live in the Anthropocene. My energy for earnestly tackling the challenges of the Anthropocene dissipates if not frequently infused with the sight of the blue sky out the window, and its invitation to spend some time later today out under that sky, in meditation with the axe and the woodpile.

There are currently no comments. Why don't you kick things off?
Contact George Privately