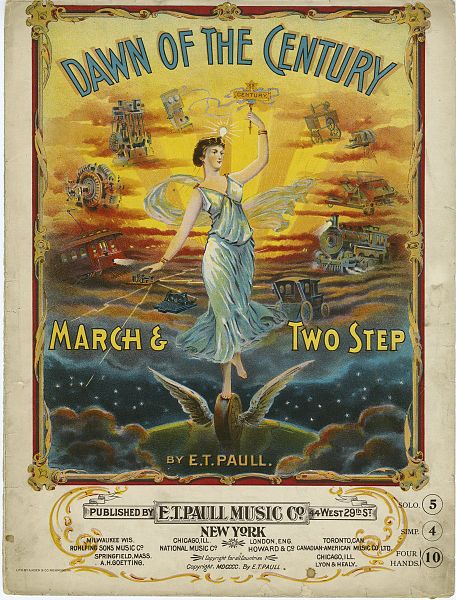 Romancing the River 4: Meanwhile Back in the Anthropocene….

Time to hit the pause button on unfolding the history of what Frederick Dellenbaugh called ‘The Romance of the Colorado River.’ I got a reminder from a reader of these posts, who appreciates the history but is more concerned with ‘what our future will look like.’

A good reminder – I did say, at the beginning here, that exploring ‘how to live in the Anthropocene’ is the basic objective of these posts. The coversheet above, from a popular song at the turn of the 20th century is probably not evocative of the way most of us feel here at the ‘Dawn of the Anthropocene.’

It might be important, however, to point out a distinction that might also be a difference; we are probably not at the Dawn of the Anthropocene today. The climatologists, geologists and other scientists who are in general agreement that a single species of life on earth has been, however naively, imposing planet-scale changes on the Earth, have had trouble agreeing on when was the true ‘Dawn of the Anthropocene’: when did we start it? Did it begin in the late 20th century when the term was coined and the phenomenon began to generate a lot of attention? Did it go back to the 1950s and the advent of the atomic age – a time when we also began adding a lot of new chemical compounds and even new periodic-table elements, as well as a huge increase in ‘forever’ plastics? Or did it go all the way back to the beginning of significant human use of fossil fuels? Or, as some think, back to the beginning of human use of fire?

I would suggest that all the bad news about our human tenure on earth that we have been receiving for the past 20-30 years is not the ‘Dawn of the Anthropocene,’ but just our dawning realization of our unanticipated but accumulating impacts on the planet.

The Dawn of the Anthropocene itself, I would argue, was when we began to ‘liberate’ ourselves from our dependence on the natural production of energy resources – wood, graze (for our ‘horsepower’), water-power and passive solar gain – and began to systematically exploit the long-stored fossil energy resources to support our expanding Holocene populations.

The darker side of that ‘liberation’ is the extent to which this new fossil energy regime had become necessary in parts of England and Europe where people were tearing down bridges and fences for fuelwood – Europe’s first ‘energy crisis.’ Too many people were expanding into too much of the area where fuelwood and fuel for the animals had always grown – but no longer in sufficient quantities to fuel the expanding population.

Anglo-Europeans had known about coal for – well, forever, the rock that burns: it was hard to extract, it was dirty and stinky to burn; wood was just better. But by the beginning of the 18th century, it was becoming the fuel of necessity, if not choice. Growing numbers of miners were needed, and the mining and movement of coal required a new level of social and economic organization well beyond the village woodcutters. New technologies too: much of the coal was inaccessible because of high water tables, and a number of creatives were working on steam-driven pumps to clear the water.

There were other problems growing along with the population. Cities had been growing along the coasts because the feudal farm system was overdeveloped – too little land, divided into too many little farming plots, barely able to sustain a family, with too many people needing to use the overworked grazing commons. Young people left because there was no land or place for them, and gravitated to the cities where a ‘natural aristocracy’ of entrepreneurs – working outside the blessings of the traditional feudal order – were either sailing off to trade with the world, or putting together ever more sophisticated systems for producing trade goods, especially the wool and cotton cloth that were being machine made in water-powered mills.

A growing dependable supply of food was needed for cultures that were, in a willynilly way, urbanizing and industrializing, after the pattern of expanding populations going back to Sumer and the so-called ‘Fertile Crescent.’ Meeting this need was accomplished from the 17th century on through ‘land enclosures’: Parliament authorized the consolidation of feualism’s tiny subsistence plots, their ‘open fields’ and ‘wastings,’ into large farms – effectively ending the feudal economy and kicking out the peasants who had farmed that land (without really owning it) for generations, and turning it all over the landed class, which did in fact generally improve the productivity of the land.

The dependable supply of food began to flow to the cities – and also a flow of peasants, whose options for staying alive were limited: the coal mines; mills in the fetid ‘paleoindustrial’ cities still trying to work out the problems of housing, food distribution, sanitation, and general urban behavior; or – immigration to America, where legend had it there was free land for farming out to the horizon and beyond. Many of the dispossessed indentured themselves – essentially became slaves for years – to get passage westward.

This was a cruel process, but it was just a better-documented accounting of what had been going on through most of the Holocene, as a warming, moderated and relatively stable climate favored the increase of life on the planet, resulting in what I described as the ‘trauma of success’ in an earlier post here (February 28): species outgrowing and overstressing the ecosystems that had let them find a niche.

Natural processes usually deal with ‘swarming’ populations through starvation, disease, droughts and floods, or occasionally just mad behavior, to bring them back into balance with their ecological environment. But swarming humans have, for around 10,000 years now, been struggling to fend off nature’s controls through cultural adaptations – first, the density-increasing transition from hunting and foraging to farming as an alternative to war-to-death with neighboring foragers also expanding. Then when the village farming economy became unable to feed the still-growing population, the imposition of a more intensively organized and industrialized agricultural system with most of the people lured or forced into a more efficient urbanized (which is to say industrialized) ‘lifestyle.’

That has been ‘The Ascent of Man’ for the past 10,000 years. The ‘civilizations’ that have resulted from those efforts to impose an urbanized and industrialized system and structures over a population that continues to grow do seem to work – until they don’t. Collapse seems inevitable for systems that outgrow our capacity to manage the complexity that our own ever increasing numbers impose on us. But that is usually coupled with the drag imposed by the leisurely pace of natural processes – the leisurely growth of trees and other natural fuels, the limiting and often irregular flows of rivers, the limited horsepower of horses, the deadly spread of nature’s famines and diseases in urban concentrations. Nudged around and tripped up by nature, civilizations seem to eventually collapse of their own weight.

But the big explosive expansion of England and Europe into North America, the largest and (thus far) most successful civilization gambit ever, was built on exercising the option to be liberated from the pace of natural process, through casting our fate with the fossil fuels. The reluctant but necessary decision to go with coal unleashed a spiraling cycle of creative problem-solving through the 18th and 19th centuries: the problem of dewatering the coal mines resulted in steam-driven pumps that within decades became steam-engines capable of powering practically anything (requiring more coal for the steam), and the engines were soon connected to wheels and began hauling goods and passengers without the one-way downstream limitations of river transport; coked coal was found to be a better component of iron-making than charcoal, and metallurgy improved in leaps and bounds; petroleum entered the game and engendered the internal combustion engine; the electric generator was invented and began generating electricity, either with coal-fired steam or the force of the rivers, invisible power that no one totally understood but that tamed the lightning bolt for human use. Et cetera, et cetera: this all added up to an unprecedented and truly revolutionary leap for the species. The Industrial Revolution was a revolution against the restrictions and limitations of the natural world and its leisurely and digressive processes.

And it all began to come together as a coordinated ‘assault force’ by the dawn of the 20th century – just as the nation was confronting the Colorado River, the wildly erratic pulsing flood or trickle that was the only major source of water for the driest quadrant of the American West. There, with a growing set of new tools, and a spirit that was, as irrigation advocate William Smythe proclaimed, ‘not merely a matter of ditches and acres, but a philosophy, a religion, and a programme of practical statesmanship rolled in to one,’ we would turn the river out into the desert, to turn the desert into a garden. We finally could, and would, reshape natural reality to fit our cultural imagination.

Not everyone had drunk those waters of the Hassayampa, laden with its romantic cultural microbes. There was Henry Adams, eternal skeptical son of the eternal patriarchate, who cautioned that ‘Nature, to be commanded, must be obeyed. The imagination must be given not wings but weights.’ And also the other skeptical Henry, another eternal son, observed that ‘when the conductor shouts “All aboard”… it will be perceived that a few are riding and the rest are run over.’ And certainly many have been run over in the development of the West.

But it was men like Thomas Edison that gave voice to the dominant spirit of the times: ‘If we all did the things we are really capable of doing, we would literally astound ourselves,’ and observing, ‘to invent, you need a good imagination and a pile of junk,’ and what was nature but a lot of resources lying around awaiting assembly?

So – there is the Dawn of the Anthropocene: our future from here, in the high noon of the Anthropocene, is a vector that starts there and powers on as it is going unless we fit it with better brakes and steering. We saw just enough in the dawn’s early light to be intrigued by the possibilities but not daunted by the unforeseen eventualities all too clearly seen in today’s noon, all the unpremeditated consequences of perhaps doing too much too quickly, and wanting Adams’ weights of responsibility on the imagination. Looking back for input on the way forward, we might also learn something about what we might have left behind that could be of value in going forward. Like John Wesley Powell’s precarious and dynamic efforts to balance the discipline of science and the love of sometimes just taking a plunge into the unknown.

Next time – what happens when the engineers begin to outrun the scientists….