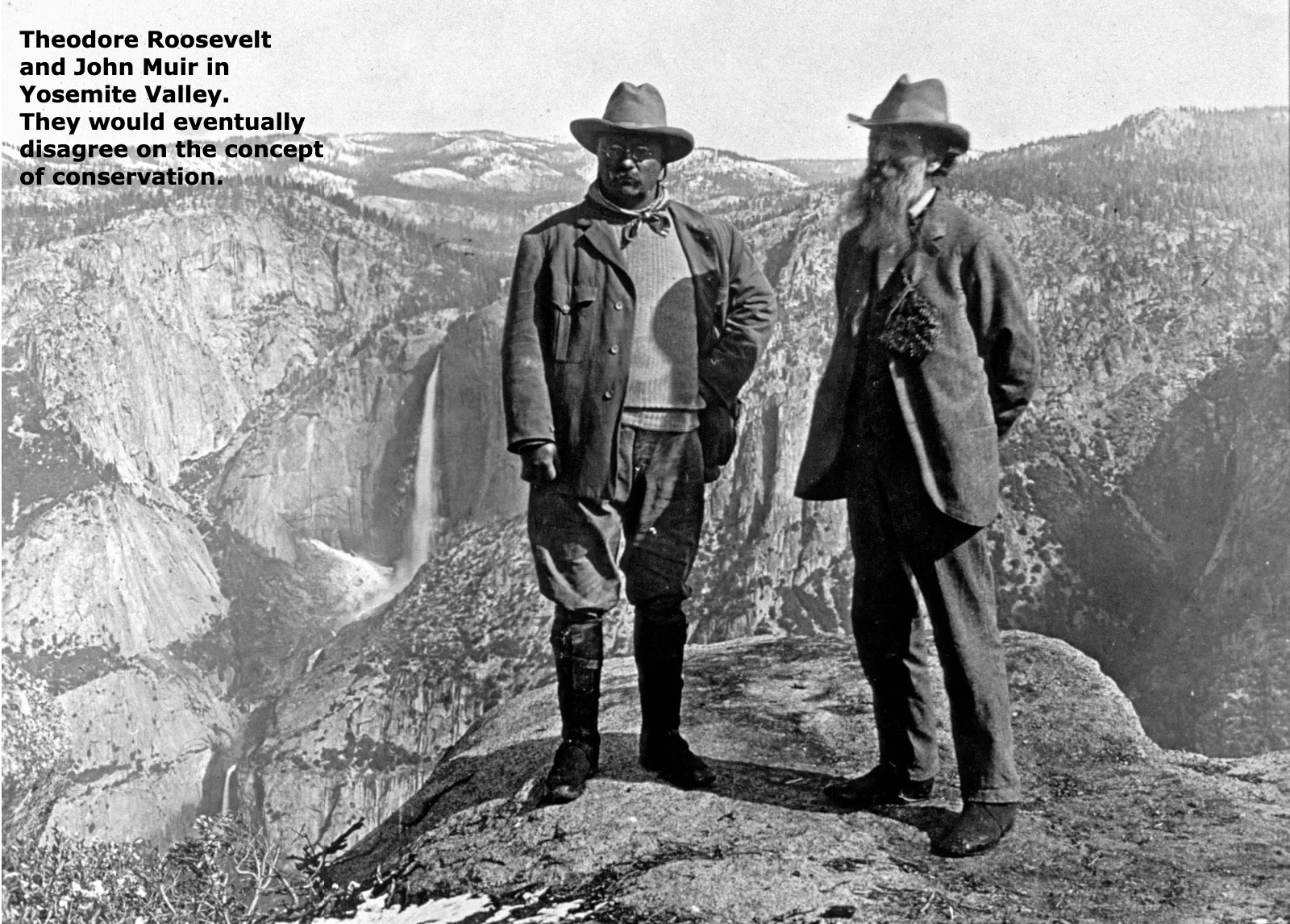 You have probably heard that this is the centennial year for something called the Colorado River Compact – possibly spoken of or written about in the reverential tones usually reserved for Biblical material. The foundation, the cornerstone, et cetera, for something called, with equivalent solemnity, ‘The Law of the River.’

We will spend some time here on the Colorado River Compact because it is an important document – but not necessarily a document that deserved to exist unaltered and unamended in a kind of hallowed state for a century. Something like our U.S. Constitution in that regard – which has been amended, although not in all the places where it most needed it. But the authors of both documents would be horrified to see their work regarded as sacred texts.

This first post focusing on the Compact will explore why a river compact was even necessary in the development of the Colorado River.

It may come as a surprise to some of you, but the development of the Colorado River was considered to be a conservation project. We remember Theodore Roosevelt as ‘the Father of American Conservation’ – a title he certainly earned for the vast amount of the public domain that he removed from the great American giveaway of land and resources that dominated in the 19th century; he set aside 230 million acres to be developed as national forests, parks and monuments, all kept in the public domain – five times more than any president before or since.

Beyond that, however, other aspects of his conservation vision were quite different from today’s concept of conservation, which emphasizes reduced use of resources, long-term sustainability and the preservation or restoration of natural conditions. For Roosevelt and his conservationist sidekick Gifford Pinchot, conservation meant using the resources we have but using them wisely, without waste.

‘The first great fact about conservation’ said Pinchot, ‘is that it stands for development… In the second place conservation stands for the prevention of waste.’ A third principle was that conservation had to be for ‘the greatest good for the greatest number for the longest time’ – an ominous concept for the remnants of the Agrarian Counterrevolution, watching the flow of people from the countryside into the growing industrial cities.

Roosevelt showed no fear in trust-busting too-big corporations, but when it came to conservation there were easier battles to wage than those against those exploiting minerals, timber, grass and any other lucrative resource that could be more or less legally taken with no requisite sense of public responsibility or sustainability.

There was, for instance, the wastefulness of nature itself (and nature had no army of lawyers defending its wastefulness at the turn of the century). Conservationists today lament that the Colorado River no longer flows into the ocean; but by the tenets of Rooseveltian conservation, freshwater running in an unusable flood through a potentially productive desert and ‘wasted to the ocean’ was a terrible waste.

Thus reclamation was conservation; the Reclamation Service was created in 1902 to address that waste, helping farmers put the river to beneficial use on the land. But, as was observed in a previous post (July 5, 2022), the real problem was not digging the ditches to carry water to the land; the problem was the source of water for the ditches – a wild river that ran huge silty ditch-clogging flows early in the growing season but then had very little water for finishing crops late in the growing season.

This was waste, by Rooseveltian standards, and the Reclamation Service, looking hungrily at all the rapidly emerging new technology for potentially changing the geological face of the planet, wanted to get to work controlling the Colorado River and storing its floods for rationalized use throughout the year. Before work developing the river could begin, however, other problems had to be worked out that had nothing to do with the physical challenges.

The Colorado River wandered through or between seven states – Arizona, California, Nevada, Utah, Wyoming, Colorado and New Mexico – and all of them depended to some extent on the Colorado River and its tributaries as a major source of surface water for all needs. Given the interstate nature of the river, the federal government would have to have at least overseen the development of the river, assuring some degree of equity among the states. And there was the further fact that only the federal government could muster the upfront financial resources for such a set of projects, with a long payback period.

But the seven states all wanted a strong voice in how the river would be developed, and they were quite uncomfortable with the idea of the federal government as the principal operator of their river and water supply. There continued to be a level of mistrust, especially among the agrarians, against the centralized government.

Another problem lay in the fact that all seven of those states distributed the right intrastate to use surface water from the public domain through the appropriations system discussed in the last post (July 18, 2022): in every watershed in each state, use of the water resource was distributed on a ‘first come, first served’ basis; water users could take as much water as they could actually put to use, but their right to use that water was based on their seniority; in a water shortage, those with the oldest water rights got their water first; if they were being shorted by upstream users with junior rights, they could place a ‘call’ on the river, and the junior users would have to let some or all of their water flow past their headgate to fill the seniors’ decrees.

This became complicated within each state when water users in the larger watersheds, composed of all smaller upstream watersheds, wanted priority for the larger watershed administered in all the upstream watersheds too. For example, the Redlands Water and Power Company far down in the Gunnison River Basin had a 1905 decree for 670 cubic feet per second, and wanted to be able to place a call in a water-short year on all junior users in the entire Gunnison Basin, all the way up to the headwaters tributary watersheds. You could be a senior user in your own local watershed, but a junior in the larger more regional watershed. Compilation and administration of all of these rights required a great deal of organization from the state engineer through major hydrologic divisions down to the local districts – the kind of work for which the computer was invented. But for most of a century it was all recorded and maintained in rooms full of ledgers and paper.

But given the willy-nilly nature of state boundaries in the West – almost totally devoid of any geographic or hydrologic sense – a question rose that no one wanted to ask or answer: would the states ‘sharing’ a river have to respect and abide by each other’s prior appropriations? Would ranchers in the headwaters of the Green River in Wyoming be subject to a call on the river from the Imperial Valley in California a thousand miles away?

The headwaters states found it perfectly logical from their perspective to argue that each state should be able to develop intrastate any and all water within its boundaries. Downstream states with no rivers rising within their boundaries, on the other hand, felt that priority of rights should be enforced in a basin-wide way, top to bottom.

Addressing the question was finally unavoidable when, in 1915, Colorado tried to put to use all of the water in a small tributary of the Laramie River in the North Platte River Basin – water which was already being used in Wyoming with water rights granted there. The question of who owned the right to use the water went directly to the U.S. Supreme Court, where it was argued and re-argued several times, but finally in 1922 the Supremes issued their judgment: states with appropriation doctrines sharing an interstate river would have to honor each other’s prior appropriations on that river.

This resolution to another problem among the seven Colorado River states. Every state was growing early in the 20th century, and wanted to continue to grow. (Nevada can be exempted at that time: its development was almost entirely over on the Sierra Nevada side of the state. Las Vegas then was just a small ranching village with some depressed mineral prospectors.)

But the growth was not happening evenly among the states, or within them. The headwaters areas above 7000 feet elevation in the upstream states were growing slowly at best; they were still dealing with the bust of the gold and silver boom, and tended to be losing population. Areas below that elevation, where soil and access to water were conducive to agriculture, were booming. The Montrose-Delta-Mesa County corridor in the Gunnison River basin, for example, doubled its population in those two decades – undoubtedly assisted by the Reclamation Service’s Gunnison Tunnel project (see last post), and a big federal irrigation project in the Grand Valley. Denver and a number of other cities outside the river’s natural basin also doubled their population, and were looking seriously at tapping into the Colorado River’s mountain tributaries.

But while these states were doubling their population in those two decades, the population of Southern California quintupled. And to water that growth, the City of Los Angeles in 1905 reached more than 200 miles out into the southern Sierras to the Owens River valley. Farmers and ranchers in the valley signed over their water rights for what they believed was to be a local Reclamation Service project, but the rights ended up in the hands of the city, which constructed a 230-mile gravity-flow aqueduct that brought most of the Owens River to the Los Angeles Basin. The deceptive way in which many of the water rights were obtained caused an outcry that resonated throughout the remaining agrarian culture nationally. President Roosevelt finally weighed in on the situation: he stated his disapproval of the deception – but then came down on the city’s side: it was the greatest good for the greatest number.

The other six River Basin states watched that situation unfold, and realized that if the federal government answered California’s pleas to take on the task of controlling the river, California might appropriate so much of it that the other states, growing more slowly, might have nothing to use for their eventual development. And the Owens Valley project could become a model for the growing cities to dewater some of their mountain valleys. The alternative to losing access to their river would be a ‘seven-state horserace,’ with each state striving to put as much water under decree as possible, as quickly as possible – not exemplary of orderly growth and development.

The only way to resolve these multiple dilemmas – other than the unacceptable resolution of just turning it all over to the federal government – was through a seven-state compact that would establish some process for the equitable distribution of the consumptive use of the river’s waters.

So Congressional permission for an interstate compact was secured, and in January of 1922, governor-appointed representatives from the seven basin states gathered in Washington with a federal representative as chair: Herbert Hoover, then the Secretary of Commerce. This was six months before the Supreme Court rendered its judgment on interstate prior appropriations in Wyoming v. Colorado, but the handwriting was on the wall there.

Next post: grinding the sausage for the seven-state Colorado River Compact….